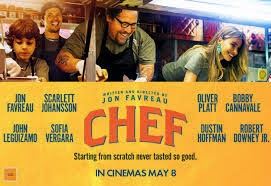 Aarti V Raman’s 3 favorite words are happy ever after.
After tonight, I am going to change that to, happy ever after, with a serving of Cubano on the side.
Yes, ladies and gentlemen, we have a movie about food, written and directed by a man who clearly enjoys it and it is filmed to perfection.
Meet Chef Carl Caspar (Jon Favreau) chef de cuisine at an upscale LA restaurant, jonesing for a change, a weekend dad whose only real passion is food. And not just food, but Food, which has presentation and flavor and that indefinable something that makes it melt in your mouth and sets your taste buds sizzling the minute you see it. Food that is so good it is sinful.  He is good at his job as evidenced by the full crowd he draws night after night, and even though he’s put on a few pounds (BIG UNDERSTATEMENT) still scores with the ladies: Scarlett Johansen in a sweet cameo as the hostess of the restaurant he works at.
Chef is unhappy under regimented management (Dustin Hoffman) and when a big review gets snuffed up when he serves the same old s**t he has served for a long time, and the article goes viral and becomes a Twitter storm, Casper takes to the internet. Needless to say, this does NOT serve his cause and he becomes the butt of even more Social Media jokes and pokes and memes as he self-deprecatingly puts it and his career as a chef is most certainly over.
But is it?
When his ex-wife famous Inez (the ever-sexy Sofia Vergara) who still has a bit of a soft spot for her kid’s dad, nudges the idea of a food truck into his head as a way of sustaining life after being blacklisted from every restaurant in the city, Chef has no choice but to accept her noblesse largesse. In the sweltering heat of Miami, with his benefactor being his ex’s ex, (Downey Jr.) capable as ever in his bootie-clad impression of a schmuck, he gets a truck.
And the truck becomes a way of life.
With the help of a loyal sous chef, (John Leguizamo) yummy as the po’boys he plates up, and a truck that is tricked out to resemble a walking sandwich (I kid you not) what else can Chef Caspar do but serve us delicious meals in town after town.
The screenplay is feel-good, and the plot could have been a lot tighter, the dialog is funny at times and the characters are well-etched out. But two things stand out for me in Chef.
The food: the perfect grated cheese being melted into a grilled sandwich, the way a porkchop is cut just so, so the viewer can almost, ALMOST taste the fresh, chargrilled scent of meat and spices cooked to heavenly perfection …you get the picture. And a young heartbreaker of a kid named Emjay Anthony.
He plays Percy Casper, the kid who never felt connected with his father till the father lost his job, his career and used his son as child labor on a truck that is filthier than some of the common toilets here. But the kid loves to cook and the kid is smart because he understands the power of Twitter. As a social marketing tool, the whole movie promotes Twitter and vice-versa and GOD does it work. But, even more than the Vine videos or the cute dimples that Anthony displays when he is in the mood to, what I enjoyed about this father-son interaction is this: they understand each other at the end of it, and nobody makes a big deal.
All they have are simple moments; real-life moments and those things never translate well on celluloid. What translates is the end result. A relationship that began as flawed and ends up in a slightly better place with a lot of scope for improvement as time passes by.

NOT the case with Chef, the movie, Chef Carl Casper or the lovely fare he dishes up throughout the movie, even right till the end.
Chef is cooked to perfection and I can’t wait for a second serving.

Viewer Verdict: A stiletto to the heart for the right amount of aww and smiles!