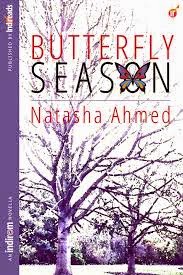 Natasha Ahmed is a fan of Rumi, the seminal poet and philosopher, without whom the world would be a poorer place indeed. This is eminently clear not from the name of her heroine, who is also called Rumi (LOVE that!) but from a poem called “Meeting Place” that the poet wrote, to describe what love really means: beyond right and wrong and good and bad.
That is how I know; she is a fan of Rumi.
Ahmed’s first novel; that which she cleverly calls novella, “Butterfly Season”, deals with the thorny subject of love and sex for a modern-day Pakistani woman. It was with much excitement that I started on this journey with 30-year old Rumi, architect, caregiver and free thinker, for someone living in South Asia. And I wasn’t disappointed at all, as Rumi and the adorable cast walked through lines and scenes as if I were a part of the conversation instead of just reading about it.
Rumi comes to London on a holiday to take a break after her frail mama’s death, where she is staying with her uptight, proper Miss sis, Juveria and her hubby. She meets Ahad, publisher, player (not so much) and undeniably good-looking and feels attraction pull her toward him like moth to a flame. (Sorry Natasha, couldn’t resist that reference!) They date, and dating turns into intense sexual chemistry, and Rumi in a moment of utter clarity and fearlessness takes Ahad for a lover.
A totally banal concept in today’s times, you might mutter, but we live in India and Pakistan and Sri Lanka, things still run just a bit different here. While our peers and friends have accepted the notion of being in several relationships and having a ‘history’, sexual and otherwise, our families and older generations are stuck in a time, when this was frowned upon. I am not taking sides here, just explaining context.
Obviously, Rumi is cast with The Scarlet Letter and her conservative family turns against her as she tries to express herself and the various choices she has made, including what she feels for the dishy but slightly commitment-phobic Ahad. And the resolution that comes is expected but welcome.
I will not dwell too much on the romance of “Butterfly Season”, it’s light, frothy, and filled with enough passion and fun to keep any true romance fan hooked from page one.
I will instead talk about the various strong female characters I found in the book. Mahira, Rumi’s bestie who is a bulwark of support and wisdom even though she comes across as zany and pushy. Juveria, the jealous younger sister who has it all, and yet can’t forgive her sister for living her life instead of doing ‘the proper thing’! The ex that Ahad runs into and the other ex who makes him see the error of his ways. These are ALL women I have been, I continue to be and can instantly identify with, that makes for some lovely pages.
There is also the pop culture references that delighted me because I was given a wonderful, warm glimpse into a world that was hitherto unknown to me and, which to my delight, I found to be as familiar to me as my own is. I loved that about “Butterfly Season”.
Ahmed’s writing holds strong, except in a couple of places, where the plot could have been tighter, but that can be easily overlooked when you see the bigger picture and see what she is trying to attempt and accomplish with her debut novel “Butterfly Season.” A lot of people are calling it bold. I disagree. I call it necessary. It is a subtle, subversive reminder to all of us that times are a-changin’ and change is GOOD.
KUDOS on doing so with two strong, passionate and vulnerable characters as Rumi and Ahad, Natasha.
I look forward to your next with much anticipation and eagerness.
A must-read for fans of a good romance.

VERDICT: Sexy boots for a truly, sexy story. (And I don't just mean that hot scene in Ahad's apartment!) :P

You can find this charming novel at Amazon, Barnes & Noble, Indireads, iTunes and Smashwords.